As crypto adoption continues to gain steam, Europe is at the helm for crypto distribution worldwide. At least $5 trillion worth of cryptocurrencies were received between July 2020 and June 2021, representing 35%. 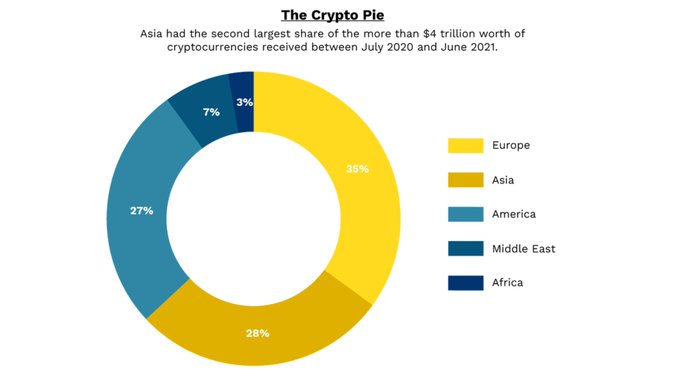 According to a recent study by payment giant Visa, a financial way of the future and building wealth were the key drivers of crypto usage and ownership.

The research also noted that cryptocurrencies emerged as part of the popular consciousness and were poised for additional growth, especially in emerging markets.

According to data analytic firm IntoTheBlock:

“There is strong resistance just below $50k, where 791 thousand addresses previously acquired 919k BTC. The amount of activity in this range makes it an important barrier for Bitcoin to surpass as many addresses are expected to sell at this contested level.”

IntoTheBlock added that BTC ought to hold above $48,000 because there is a possibility of a deeper correction to the $43K area, given that 344,000 addresses bought 395k BTC.

If the $48K level holds, Bitcoin faces little resistance until $55,000, according to the data analytic firm.